Background: Anthropogenic global warming, interacting with social and other environmental determinants, constitutes a profound health risk. This paper reports a comprehensive literature review for 1989-2013 (inclusive), the first 25 years in which this topic appeared in scientific journals. It explores the extent to which articles have identified potentially catastrophic, civilization
endangering health risks associated with climate change.

Methods: PubMed and Google Scholar were primarily used to identify articles which were then ranked on a three point scale. Each score reflected the extent to which papers discussed global systemic risk. Citations were also analyzed.

Conclusion: The enormous expansion of the literature appropriately reflects increased understanding of the importance of climate change to global health. However, recognition of the most severe, existential, health risks from climate change was generally low. Most papers instead focused on infectious diseases, direct heat effects and other disciplinary-bounded phenomena and consequences, even though scientific advances have long called for more inter-disciplinary collaboration. 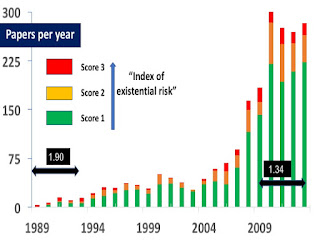 Posted by Global Change Musings at 6:43 AM No comments:

I wrote this for another paper, currently under review. However, it was cut, due to lack of space. Eventually, I hope to weave this material into another article, and also into the forthcoming second edition of my edited book “Climate Change and Global Health”. This also builds on a blog I posted in 2015 called “Climate change and heath: primary, secondary and tertiary effects.

36.      Butler, C.D. "Regional overload” as an indicator of profound risk: a plea for the public health community to awaken. In Medicines for the Anthropocene: Health on a Finite Planet, edited by S. Quilley and K. Zywert. Toronto, Canada, University of Toronto Press, 2019 (in press).

Purpose of review: To combine evolutionary principles of competition and cooperation with Limits to Growth models, generating six principles and one proposition for a new sub-discipline, called “planetary epidemiology”. Suggestions are made for how to quantify four principles.

Recent findings: Climate change is one of a suite of threats increasingly being rediscovered by health workers as a major threat to civilization. Although “planetary health” is now in vogue, neither it, nor its allied sub-disciplines have, as yet, had significant impact on epidemiology. Few if any theorists have sought to develop principles for Earth system human epidemiology, in its ecological, social and technological milieu.

Summary: The principles of planetary epidemiology described here can be used to stimulate applied, quantitative work to explore past, contemporary and future population health, at scales from local to planetary, in order to promote enduring health. It is also proposed that global well-being will decline this century, without radical reform.


The recent release of the Intergovernmental Panel on Climate Change (IPCC) report on the difference between a 1.5 and a 2 degree C world (i.e. above the pre-industrial level, although note that the 2015 Paris climate agreement is vague about the baseline and hence the target) should be drawing the attention of policy makers, as well as all who care about public health.
But global warming is only one of many threats faced by civilization. Another milestone is nearing. In 2022 it will be half a century since publication of the book Limits to Growth. The exercise it describes is a still poorly understood simulation of our future, warning (like the IPCC) that “business as usual” will meet a wall, perhaps within a generation. When that happens, human well-being will decline, and perhaps, even population size, contrary to all sanctioned forecasts.
As appreciation of existential risk grows, health movements trying to avert catastrophe proliferate, although most (including forms of Planetary Health) avoid close encounter with the most frightening possibilities, perhaps worried that too much bad news will be disempowering.
Numbers that warn policy makers of growing peril may help them to change course. A new paper (sorry it’s not open access) attempts, for the first time, to identify quantifiable principles which can complement those already used in epidemiology to consider public health and human well-being at the truly global scale. The paper argues that, like 17th century London haberdasher John Graunt, existing data (collected for another purpose) can be used to uncover epidemiological insights, hidden in datasets, together with human characteristics as diverse as satellite measures of ground water, the tenets of evolution, ingenuity and norms (“institutions”) such as co-operation, conservation and prudence (or its lack). The paper proposes that these principles may even be used to establish a new sub-discipline, tentatively called “planetary epidemiology”.
But such a discipline may not have any significant impact. Many forces, including corruption, self-censorship, misinformation, and denial collectively inhibit the many actions needed. A policy shift also needs pressure, from the media, from the middle class, from the young, and from professionals.
Neither the Limits to Growth nor this paper on planetary epidemiology predict the inevitable demise of civilization this century, but this possibility cannot be excluded. These arguments are unlikely to alter the view of optimists. However, irrespective of ideology, it is clear that the health implications makes this topic relevant to epidemiology.