Economics, limits to growth, and the falling price of oil and coal

The price of oil and coal is falling, despite both resources clearly being finite.
In a nutshell, the price of both is falling because of temporary over-supply. I believe this has several reasons. In Australia some coal mines produce coal at a cost higher than they can now sell it for. It seems irrational to do this, but there are some cases where temporarily stopping production is even more expensive. There is a momentum which propels employment and investment. In some cases mines may have to pay penalties if they temporarily halt production. There must be articles on this, if I can find time I will investigate and link.

Consider there are n (say 100) coal producers in this position (producing coal - or oil - at a loss). If n/2 (50) cease production then the supply falls, the prices rise and suppose the other 50 then become profitable. But many of the 100 gamble that they will survive the unprofitable "window" .. and if they do pull out then they definitely "lose" - they cannot (quickly) become profitable again .. i.e. join the 50 who in theory are profitable if 50 pull out .. so a kind of tragedy of the commons applies, inhibiting all 100 from behaving rationally.
Now, of those 100, some have much higher production costs and -- if they all know their production costs, in comparison to others then the most expensive would pull out first. Let's assume a few outliers (say 10) will, so we have 90 left. But of these, the production cost for many is similar. So they all see it as in their long term self-interest to hang on.
I think the duration of irrationally persisting with the loss-making exercise also depends on the patience (or desperation?) of the banks investing in the mine. I bet few if any of the coal company (or bank) executives making the decision to continue to produce at a loss are risking their own money, though some probably have shares in the company and bank.
In fact, the longer these executives delay ceasing production, the longer they draw their income, and the longer they delay the hassle of looking for another job. Maybe some of them take a paycut but hang on in their position (Alan Joyce comes to mind) .. thus many executives have a conflict of interest .. their own financial well-being is enhanced by decisions against the financial well-being of their company.
And I reckon something similar happens at the bank level .. and beyond that at the politician level. .. So, it is a house of cards.
If resources were not limited, it would not really matter (apart from the financial loss to small investors who, for example, see their investment in Whitehaven etc fall).. but physical and ecological resources are limited .. the embedded energy in the stranded assets has an opportunity cost and also a pollution cost.
Posted by Global Change Musings at 5:03 AM No comments:

Why I was arrested on November 26, 2014 at the Whitehaven coal complex, NSW Australia


Yesterday, I was arrested protesting the Whitehaven coal complex, in north-western NSW. 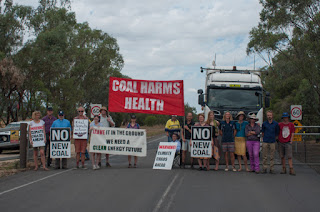 In 1991 my first scientific paper concerned climate change and health. Since then, concern for what I have called “environmental brinkmanship” (of which climate change is a major part) has steered my academic career. Now, increasingly, it drives my personal life. In early 2013 I sweltered through the two hottest days in Australian history. Unprecedented heat reached our cabin in the Tasmanian forest. What should have been a holiday was instead spent continually checking bushfire status. Towns were burned, some people survived only by sheltering in the sea. Australian fires can outrun cars. Had a fire entered our valley we could not have tried to leave on the single road. It was an anxious time.

On the second morning I was awoken at 3 am with sinus pain, caused by smoke. It roused me. I checked the internet. Luckily for us, at least at that time, the smoke was from 60 miles away. The fire was contained, the smoke was not. That personal experience, integrated with my academic work and the knowledge that, left unchecked, climate change will lead to many more such events (and worse) propelled my declaration of intent to be arrested by end 2014. That promise, made publicly, was fulfilled in northern NSW on November 26.

We need a whole-of society effort to transform to a clean-energy fuelled future. If we don’t, climate change will undermine civilisation, including by acting as a “risk multiplier” for famine, migration, social unrest and conflict. My recently released edited book “Climate Change and Global Health” explores these issues. But I now believe that my academic work of writing, speaking and editing, while necessary, is insufficient. We need to work even more effectively to end Australia’s coal frenzy, and civil disobedience is an essential component of that.

Civil disobedience has a long and honourable history, and was central to giving the vote and other rights to women in some countries. Civil disobedience lessened racial discrimination in countries such as the US. Peaceful mass protests, including hunger strikes, helped free the Indian sub-continent from British rule. In Australia, a direct challenge to state power in the form of large-scale civil disobedience is now called for, in order to prevent the lucky country from becoming an even more aggressive “Earth poisoner”.

Coal combustion was once of net benefit. But today, we know that the enormous scale of coal burning loads the ocean and atmosphere with a dangerous burden of toxins, especially the invisible gas carbon dioxide. After decades of effort, affordable clean energy technologies are emerging. But instead of encouraging their rapid development so that Australia can become a clean energy superpower, the policies and statements of our government reveal attachment to the old energy paradigm that is marvellously contemptuous of modern science. Senior Australian officials openly express their disbelief in climate science, sometimes from national media platforms. Australian Prime Minister Tony Abbott even proclaimed recently that “coal is good for humanity”.

Yet climate science reveals that our addiction to fossil fuels, especially to coal and tarsands is poisoning our common future. The dose we are administering to the biosphere is toxic, especially to future generations. The “social license” to burn fossil fuels needs to be removed, just as is smoking in hospitals.

Like Bill McKibben, I believe that people of my age (59) should be willing to make what is a tiny sacrifice compared to the enormous risk that the path pursued by our politicians is leading us along. I cannot stand by any longer. On the other hand, if NSW continues to evolve towards a coal-police state then the risk may not be so small after all.

There is also a spiritual dimension to these protests, as well described by the journalist Graham Readfearn.

Postscript: A video was recorded in 2015, before the devastating 2016 fires in Tasmania. It tries to explain why I, a contributor to the 2014 IPCC health chapter, was arrested to protest coal exports from Australia. Thanks to Jody Lightfoot and everyone at Common Grace for this chance to explain my actions further.
Posted by Global Change Musings at 4:25 AM No comments:

Why I am going to Maules Creek next week


I am travelling to Maules Ck on Monday to join the Leard forest blockade, to oppose the expansion of the Whiehaven coal mine. I am doing so as a member of the Australian Religious Response to Climate Change, and as co-founder of the Buddhist influenced NGO BODHI.

Primarily I am going to fulfill what I see as part of my responsibility as a professor of public health in Australia, an incredibly fortunate nation that should not be so wedded to coal.

I am a contributor to the recent IPCC health chapter, albeit only a minor one. More significantly, I think, I am sole editor of the recently released  book "Climate Change and Global Health" (CABI, UK) launched last month at the London School of Hygiene and Tropical Medicine. I attach a photograph of the cover. I am also first author for a forthcoming letter in the ANZ Journal of Public Health. It concludes "while continuing to write, speak, organise, and advocate for action we have also concluded that civil disobedience, by health professionals, as part of a wider social movement, is now necessary. Collectively, such actions may yet trigger sufficient corrective action to see the optimists vindicated."

I may be the first contributor to the recent IPCC report to publicly advocate such steps, though I am well aware of Jim Hansen’s role in climate science and civil disobedience.  Indeed Hansen’s actions have long inspired me.But I do not think Hansen has contributed to any recent IPCC reports – and I am pretty sure I won’t be asked again, either! Professor Mark Jaccard, a professor of sustainable energy at Simon Fraser University , and a contributor to the 2007 IPCC report has also been arrested, after setting up a blockade on train tracks in British Columbia, Canada. I do not yet know if Prof  Jaccard has contributed to the most recent report.

No doubt people like Janet Albrechtson will argue that my actions show that the IPCC is politically compromised, but I believe the reverse is closer to truth. Few of the many IPCC contributors I have met or heard speak appear anything like as “politicised” as I am (or for that matter, as Albrechtson is).

From its origins, leaders in public health have interacted with politics, and have sought creative ways to influence public policy and public opinion. As a public health worker (first degrees medical science and medicine, post graduate qualifications in tropical medicine, epidemiology and population health), I am not fully qualified to form a definitive opinion about the accuracy of climate science. But what I can do is consider the implications of published climate science for public health. Having done so for many years, and in great detail (as the book is evidence of) I have concluded that it is appropriate to seek novel ways to influence public policy in ways that will protect and enhance public health, against the slowly worsening and seemingly inexorable assault from climate change.

As I said at the launch of the book I might be making a “type I error” – ie acting without complete certainty, but in medicine that was how I was trained .. eg diagnose appendicitis and recommend surgery; do not wait for the post mortem. I see my actions as nothing more than preventive medicine, but I do regret that more conventional ways to influence Australian opinion do not seem to be enough.

To give my actions more significance and weight I would appreciate any assistance with publicity that you might give.

Posted by Global Change Musings at 10:45 PM No comments: