The following is based on the dedication of my edited book “Climate Change and Global Health” (CABI, 2014). The dedication is to the late Dr Paul Epstein who died in the early stages of its planning. 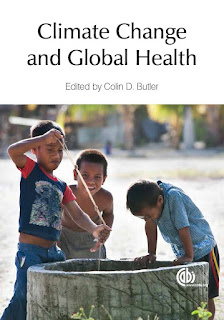 I first became aware of Paul’s work in 1992, when I was a solo general practitioner in a small Tasmanian country town. Before the internet, one of my few connections with international health was The Lancet, delivered weekly by the postman. In one such issue, soon after the Earth Summit, I read Paul’s report of a symposium also held in Rio, which led to the Heidelberg Appeal, and reminded me that Gross National Product needs adjustment for loss of “natural” capital.

The Appeal, signed by more than 50 Nobel Prize laureates, stressed the central role of science in measuring and preserving resources, and in motivating the public and politicians to help protect them. Paul wrote “the Appeal concludes: “The greatest evils which stalk our earth are ignorance and oppression, and not science, technology, and industry, whose instruments, when adequately managed, are indispensible tools of a future shaped by humanity, by itself and for itself, overcoming major problems like overpopulation, starvation, and world-wide disease.”1

These words, reported by someone from the Harvard Medical School, were immensely encouraging. Tasmania, far from Brazil, is the site of the world’s first Green political party (founded 1974). In its capital, Hobart, I had heard lectures by Paul Ehrlich and David Suzuki. Clearly, adverse global environmental change, together with nuclear weapons, represented the largest threats to human well-being on the planet. While studying tropical medicine at the London School of Hygiene in 1990, I had met Maurice King, a guest lecturer with whom I had talked for three hours. Maurice also perceived climate change (together with high population growth rates in Africa) as extremely important to development and poverty relief. People like Maurice were rare among medical doctors at that time. Dr Bob Brown, a former general practitioner was another – but, by then, Bob was leader of the Tasmanian Green Party, and no longer working directly in health.

Paul was the first U.S.-based health worker that I knew of who so clearly recognised the links between adverse planetary change and the risk to future human well-being, connections stressed by Ehrlich and Suzuki. These changes include the relentless conversion of forests and wetlands to fields and farms, with resultant loss of biodiversity, and the inexorable rise in climate changing gases. Both phenomena are underpinned by ongoing rise in levels of human population, aspiration and consumption, issues that the Australian epidemiologist Tony McMichael calls “Planetary Overload”. These risks accumulate, driven by high-level denial of “limits to growth” and "human carrying capacity".

Epstein became one of the leading academics active in alerting those concerned with public health to the risks of climate change.2-4 Highlights included his key role in an early series of articles on climate change and health in The Lancet, his work with the re-insurance industry, and his critique of the cost of coal, including its health hazards. Before his premature death, Paul and the science writer, Dan Ferber, also co-wrote “Changing Planet, Changing Health: How the Climate Crisis Threatens Our Health and What We Can Do about It”.

I was fortunate to meet Paul twice, though we corresponded occasionally from 1994 until 2011. In 1994, he sent me collected papers used to teach at Harvard's newly formed Center for Health and the Global Environment, which he had established with Eric Chivian, a founder of the International Physicians for the Prevention of Nuclear War.

I first met Paul in 1997, in London, with a group of physicians active in the International Society of Doctors for the Environment. Paul was active in the then U.S. affiliate, Physicians for Human Rights. The other encounter, six years later, was in New York City, for an inaugural meeting of the work that led to the report on climate change and disasters, led by Paul and funded by the UN Development Program (UNDP) and Swiss Re, a leading global re-insurer. Paul invited me because of my involvement with the Millennium Ecosystem Assessment, whose conceptual framework linked human well-being to ecosystem services. At that meeting, Paul arranged for Mark Malloch-Brown, then head of the UNDP (and substantially responsible for the text of the Millennium Development Goals, including its hasty phrases about sustainability), to talk to us; we met the next day at the UN Headquarters building. Paul’s connection with extremely influential people also included Al Gore, who consulted with Paul when preparing his Nobel-Prize-winning movie “An Inconvenient Truth”. My final contact with Paul was when I invited him to write a chapter for this book. He sadly had to decline, due to his illness.

Accessible articles about Paul's life include obituaries in the New York Times and in PLoS Biology. These reveal a dedication to issues of social justice and health care, evident from his student years in the U.S., later extending to Mozambique, Nicaragua, and El Salvador. Paul linked the breakdown of sanitation in parts of Latin America to structural adjustment and the onerous conditions imposed by international lending agencies such as the International Monetary Fund (IMF) on national governments in developing countries. The resulting disinvestment in public health infrastructure led to unsafe sewage management, contaminated water, and, ultimately, the cholera outbreak in Latin America in the early 1990s. This opportunity for cholera was also facilitated by warmer sea surface temperatures associated with El Nińo, as well as the unregulated transfer of bilge water from Asia to the Peruvian coast.

I sense that Paul was considered by some, at times, to have crossed from science to activism, to have eschewed the most conservative interpretation of evidence. Perhaps in part this reflected his extensive clinical experience, including in low-income settings, where prognoses are often based on limited data, leavened by experience. Doctors have a duty of care to think in a precautionary manner, and to sound warnings in the interests of their patient, whether an individual, a population, or the planet. The world needs more Paul Epsteins, and it needs more of us, individually and collectively, to respond to the sober cautions he and his colleagues have provided through their scientific assessments and prognostications, if not for their own futures, then for the generations to follow.

There is a recent tribute to Paul contained within the fascinating commencement address to new Harvard School of Public Health students, by Dr Larry Brilliant. It's highly recommended if Martin Luther King, the Grateful Dead, and the eradication of smallpox are of any interest!

Posted by Global Change Musings at 12:30 AM No comments: