An open letter to Hydro Tasmania

You are far more aware than I of the energy crisis in Tasmania, compounded by flooding in June 2016, aggravated by unusually warm water in the Tasman Sea, and possibly worsened by cloud seeding (which was undertake by Hydro despite the flood warning).

I am concerned that there might have been other mismanagement, not only concerning the selling of power to the mainland and possible risk to the integrity of Basslink (see below) but also the selection of reservoirs to disproportionately drain.

Basslink integrity and turbine safety
In an article in the Saturday paper, called "Tasmania's power crisis" Luke Crowley, spokesman for the union representing high-level hydro workers in Tasmania, Professionals Australia, is reported to have said: "the problem, .. has been coming for a long time and is not just due to lack of rain or the cable break. .. He says switching from such high levels of export back to import put more stress on the cable and, he says, may have contributed to the breakage. He says such profligacy with the hydroelectric resource not only has “fried” the cable but led to levels in the dams that are so low – and have been compounded by the lowest recorded annual rainfall in the past year – that the actual physical infrastructure of the dams themselves is being threatened."

Luke Crowley also warns of "a whirlpool effect where air gets into the turbines due to the low water levels and then gets compressed and expands and explodes. He says engineers are telling him that, with no rain, many of the turbines would be unsafe to operate within two months."

The pattern of reservoir drainage
Despite the recent flooding, some of the biggest reservoirs are still very low. For example, today (June 18, 2016) Great Lake is still 16m below the dam wall, and Lake Gordon is an incredible 40m below its dam. Yet, the levels for the 5 dams on the Mersey Forth are either spilling or almost spilling. In the recent floods water not only spilled over the spillway of the Cethana dam, but I am told, was so high for a while that it almost spilled over the Cethana dam wall.

Since the 5 dams on the Mersey Forth system were all spilling simultaneously should these reservoirs have been drawn down far more than Lake Gordon etc? Flooding of this system significantly harmed the towns of Latrobe and Forth, as you know.

Of even more significance, my opinion is that Tasmania should be far more frugal exporting its power to the mainland than it has been, even if there was a carbon tax and even if no El Niño is forecast. Instead, it should be using its carbon friendly power to attract skilled job-intensive enterprises to the state, similar but more biased to people than to big business, than your old policy of "hydro-industrialisation".

There is an obvious exception to being frugal with the export of hydro-power. Such power can be safely exported not only if the dams are spilling, but also also if the dams are near full with rain forecast; especially if towns vulnerable to flooding lie downstream.

About the author
I am Australia's first IPCC contributor to have been arrested for civil disobedience concerning climate change (2014). I was also arrested for civil disobedience in 1983 protesting the policies of Hydro Tas, concerning its proposed dam on the Franklin River, following the loss of Lake Pedder. The flaws in your policies were clearly apparent, at that time, on economic grounds apart from anything else.

I have lived in Tasmania, intermittently, since 1974, and I have owned land in the catchment to Lake Cethana since 1978; I still own this.

Posted by Global Change Musings at 8:21 PM No comments:

The world faces multiple crisis. High income nations feel besieged by refugees and asylum seekers. A large number of low income nations are wracked by insurgency, division, and in some cases open war. The two spheres interact, generating xenophobia, fences, walls and detention camps at the barriers. At the same time, the climate is inexorably warming and wilding, as humanity treats the atmosphere as a sewer, oblivious to the harm we are doing it as our predecessors were to the filth they poured in the river Thames. These two issues are related; we are a species of primate, descended from trees, but so entranced with our technological progress that too many of us think we no longer need Nature.

On the whole, in the last ten thousand years (the Holocene) Nature has been benign, forgiving and abundant. Humanity has flourished. However, unless we quickly alter our path, on a scale that today seems almost unimaginable, we well leave this sweet spot behind. Future Nature will not be so benign. We risk a new Dark Age.

In this context, it is imperative that we value and protect Nature that remains, including our forests. Australians have, in recent decades, almost led the world as carbon criminals. Our record on biodiversity is also poor. This behaviour has to change, from the bottom up and the middle out. Politicians like Bob Such are unfortunately rare, but even the lawyers and unionists who dominate our parliaments, and who largely appear indifferent to Nature, will listen to people if we show we care enough. As the multiple global crises deepen, this is the only chance we have.

Colin is Professor of Public Health at the University of Canberra and a visiting fellow at the Australian National University. He qualified in medicine from the University of Newcastle, NSW, in 1986. His academic work has, for many years, principally involved interactions between society, health and the environment. In 2009 Colin was named as one of a hundred doctors for the planet. Colin has published about 130 articles and book chapters and given over 70 invited talks internationally. He is sole editor of “Climate Change and Global Health” and senior editor of “Health of People, Places and Planet”.

Colin has twice been arrested defending the environment, first at the campaign to protect the Franklin river in Tasmania from flooding in 1983, and again in 2014, near the Maules Creek coal mine in NSW, to protest the lack of high level Australian leadership over climate change. In doing so, Colin became the first Australian contributor to the Intergovernmental Panel on Climate Change (IPCC) to be arrested for climate disobedience, and one of very few, globally.

Posted by Global Change Musings at 9:18 AM No comments:

A call for leadership over climate change, health, and human survival


In June 2016 severe weather events struck parts of NSW and Tasmania, characterised by the loss of several human lives, flash flooding, coastal erosion and considerable damage to coastal structures, including homes. Animals also suffered, as did people close to them, connected emotionally, economically, or in both ways. Sheep, cattle, bananas and even two horses in Western Sydney, used by disabled people died (one horse used by the disabled was rescued).

Some climate scientists still propose that no single event can be attributed to climate change, but an increasing number (including Kevin Trenberth) reverse the argument, pointing out that the climate is in a new state, and all such events are influenced by the hotter wetter atmosphere.

Irrespective of their case, we know that the sea level is rising and its rate of increase is accelerating, as oceans warm and expand and as ice melts. Only very aggressive climate action can save parts of many of the world’s coastal cities from inundation by century’s end (including Miami, New York and New Orleans).

Unfortunately, sea level rise is far from the end of the problems we face.

As I wrote in an article ("Sounding the alarm: health in the Anthropocene") currently under review:

"Two recent papers and a commentary warn that parts of the Middle East and North Africa, especially near the Persian Gulf will become virtually uninhabitable under some plausible climate change scenarios by 2100, due to the combination of rising temperatures and humidity. Another, led by the director of the Max Planck center for chemistry in Germany, anticipates that:

“climate change and increasing hotweather extremes in the Middle East and North Africa, a region subject to economic recession, political turbulence and upheaval, may exacerbate humanitarian hardship and contribute to migration”.

Following the Sydney storm, NSW Emergencies Services Minister, the Hon David Elliott was asked on News Radio if he thought there might be a pattern emerging. After all, the world has recently experienced drought, fires, other floods, heatwaves, unusual lightning, coral bleaching, marine heatwaves.. 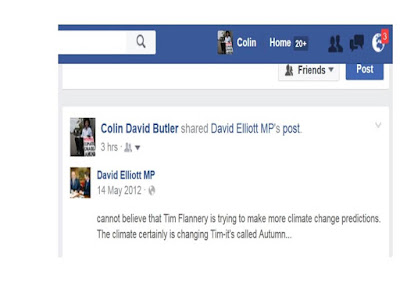 Mr Elliott, who in 2012 attempted to ridicule Climate Councilor Tim Flannery about climate change (see facebook post to right), evaded the question, replying that he is “no weatherman” (listen at the 4 minute mark).

It is good that some in the media are finally raising the issue of climate change at the time of the latest tragedy, but lamentable that people in high office with a duty of care to lead on this issue (including Barnaby Joyce the temporary Australian Federal Minister for Agriculture) somehow think their background as a lawyer or an accountant qualifies them to understand the science better. What is the point of publicly funding science if that advice is then regarded with contempt by our "leaders"?

Mr Elliott has a background in the army and as a peacekeeper. Encouragingly, many in the military are connecting the dots between climate change, ethnic divisions, population growth and conflict.

But evasion such as his is not good enough. We instead need genuine leadership such as from UNFCCC Executive Secretary Christiana Figueres to slow the rate of climate change. Its current trajectory, unchecked, will ruin the health and well-being of our entire species. If we take the Paris Climate Agreement seriously we might yet rescue civilisation. But as Kevin Anderson has repeatedly pointed out, it too contains considerable wishful thinking. We thus need real leadership, at all levels, but especially the top.
Posted by Global Change Musings at 11:36 PM No comments: